Previously we discussed local debugging with Goland IDE. Currently we'll discuss how to remotely debug the program, which is working inside Docker container, with Visual Studio Code and Goland IDE.

In a local debugging IDE manages everything — compiles the program, starts it, connects to it.

Why do we need a remote debugging? It seems to me that it is a rare case, but here are the situation one may need it:

Before starting to implement remote debugging, one must understand, that bugs can fixed easily on early stages of development. Debugging locally one can run program locally with go run или delve debug or any IDE; but with remote debugging one have to wait for program to be deployed to remote environment.

Delve — command line tool. All it's CLI parameters are defined here.
Besides having network API Delve also has command line debugging options to debug directly from command line (without IDE). But we are not going to use this option.

So we have to start Delve and provide remote connection to it from our IDE.

For better understanding of this article, i've created a Github repository with all related code.

Let's set the Dockerfile up:

GO Compilation flags are supported by many GO tools - build, clean, get, install, list, run, test.
Due to this, Delve binary, received with go get, is also statically compiled. By default, Delve binary compiled in Alpine Linux environment depends on two libraries. One can check it with ldd tool:

-gcflags "all=-N -l" flags, which are used to compile the main program, are required to make Delve debugging our program properly.

Let's start our image as a container by using of docker-compose.

The docker-compose.yml contents is below:

Previously we set up the ENTRYPOINT in our image as /dlv, so now in the command parameter we pass Delve arguments only. Parameters above are passed to make Delve work as network server and to enable rich logging.

Let's call docker-compose -f ./docker/debug/docker-compose.yml up and check the logs out.
This command is also available as make docker-run-debug.

The logs mean that the debug server is started on 2345 port and it is ready to accept connections.

Let's connect to it from IDEs.

We have to open our project in IDE. The source code represent the program in our container.

Before doing anything in IDE, let's check that our Docker container is working currently. 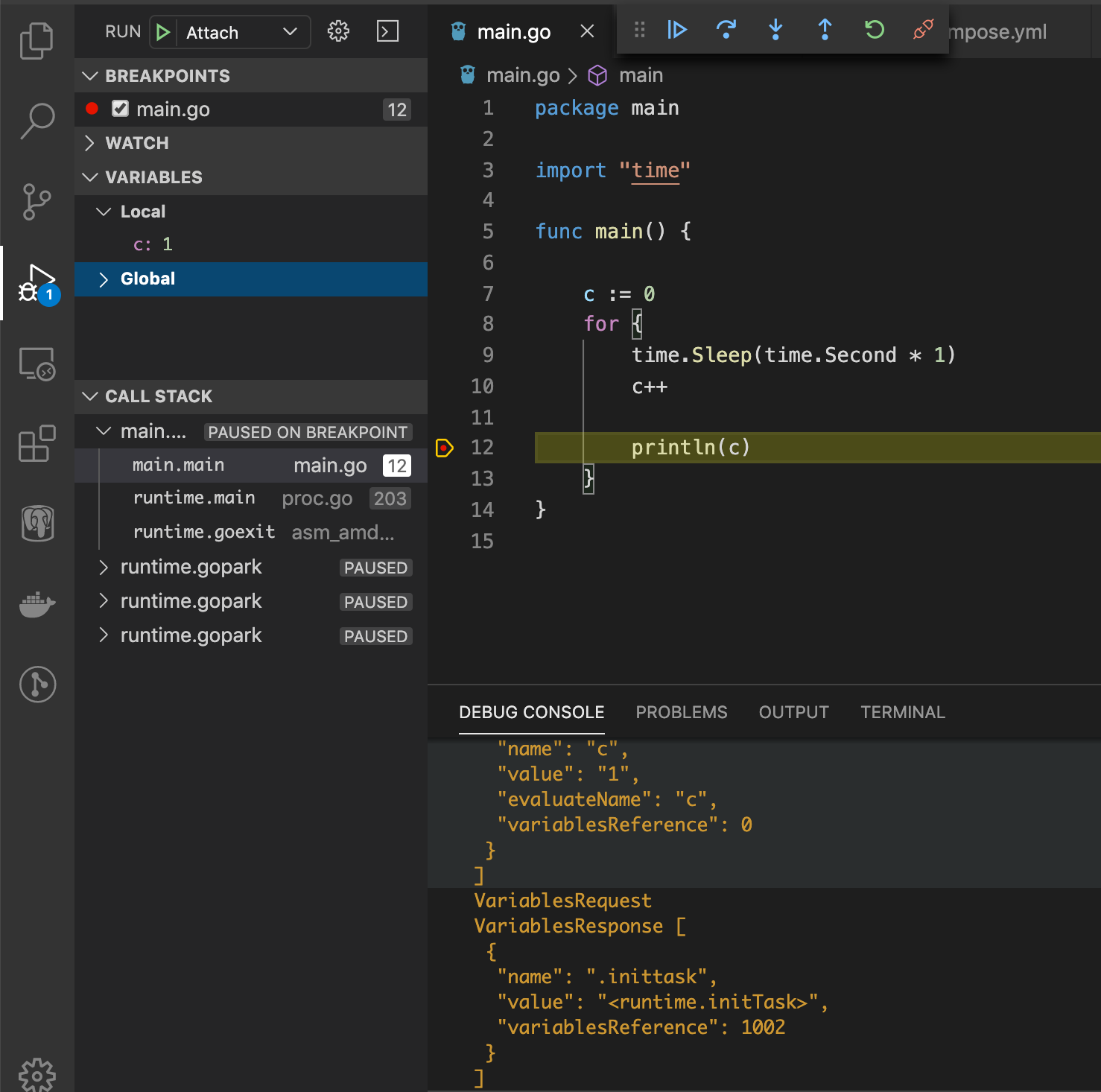 We should set breakpoints and we need them to stay (visually in IDE). Each breakpoint setting is reflected in Docker containter logs — there should not be errors.

All settings in this IDE can be changed in graphical interface, without editing configuration files.
Important thing — enable modules integration: 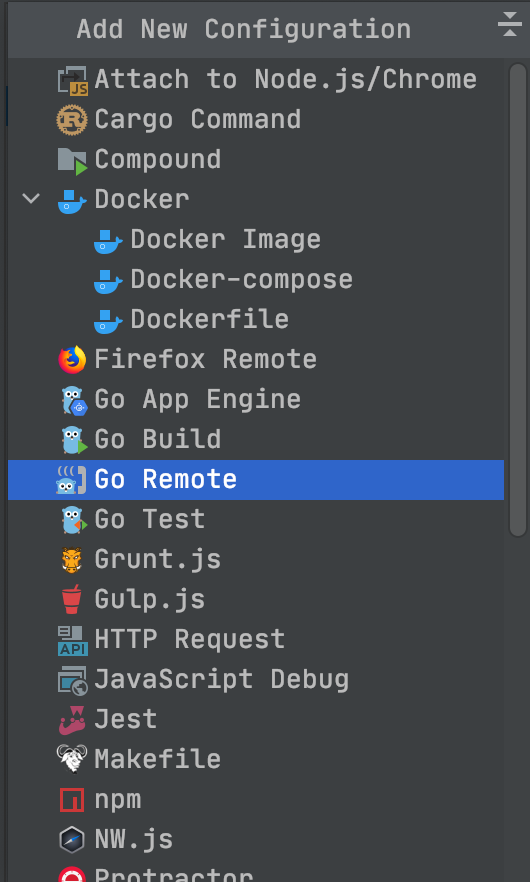 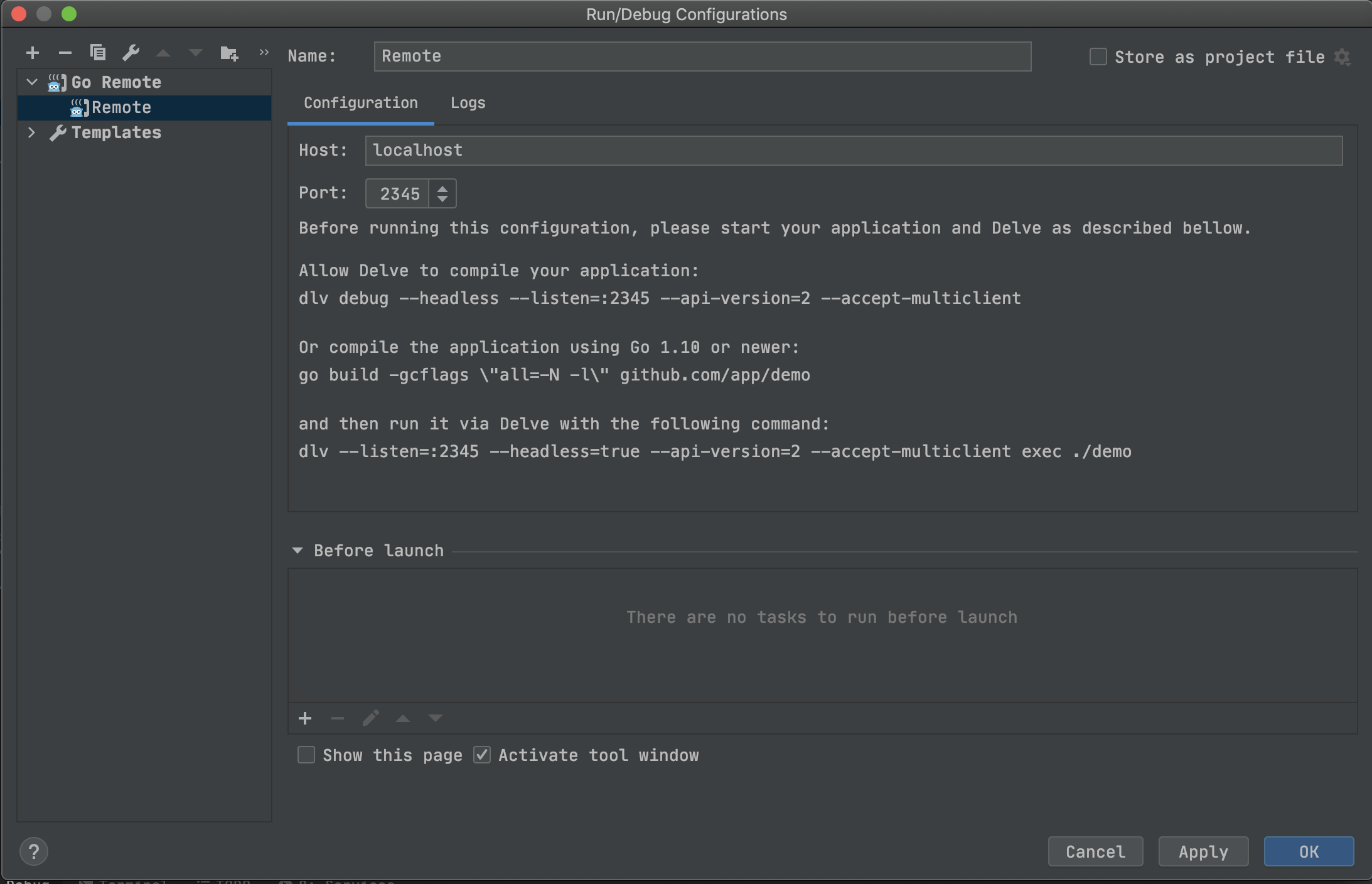 Same as in VSCode, we should set breakpoints and ensure they are in place. We should check Docker container logs. If there are any errors like could not find file somedir/main.go, you need to enable GO modules integration.